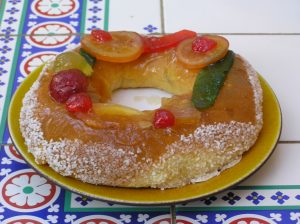 The best thing about celebrating Spain’s Three Kings’ Day is eating the puffy ‘Roscón de Reyes’ brioche cakes. They’re piped with sweet marzipan and cream and topped with candied fruits that represent the glistening medallions worn by the Three Kings.

The Roscón de Reyes consists of a mass of flour, sugar, yeast, butter, orange blossom water and candied fruit. It has a round shape imitating a royal crown and the frosty fruit would be the jewels of the crown. In Portugal it is known as “Bolo de Rei” although it is cooked with other ingredients and in France it´s known as “Gateux des rois”.

The roscón de reyes primitive, the one of the Roman time, consisted of a circular sweet made with dates, figs and honey. It was elaborated in the Saturnalia festivities, in honor of the God Saturn, that were celebrated at the end of December. In these festivities the slaves sent over the masters and the wars and the executions of prisoners were suspended. In these primitive roscones the bean was already introduced and the lucky one to find it was the king for a day.

This traditional Spanish sweet that consumes on January 6, the Day of the Wise Men. It has a Roman origin since in the 4th century the Catholic Church adapts the Saturnian pagan feasts to the new dominant religion and with it also the culinary customs.

Jamón is the trademark of Spanish cuisine, featuring prominently in virtually every restaurant and family kitchen. As home to two types of world famous cured hams, Spain honors its Jamón as both a cultural icon and everyday indulgence. The curing process is regarded as a sacred art, with many producers honoring traditions that go back thousands of years. The ultimate result is a long, thin leg of ham with a deep golden hue to its fat. The meat is dark red and well marbled. We had an incredible experience in the city of Caceres. There Pedro Lancho, the owner of Encinar de Cabazón, served us a feast fit for a king. The highlight was when the professional waiter at his favorite restaurant brought out plates of his Gran Reserva Jamón Ibérico de Bellota. It was served in paper thin slices on a plate that was warmed to about 75 degrees. At that temperature the fat literally melted onto the plate. On first bite, the flavor of the ham was incredible. Sweet, nutty, and not too salty. Then the complexity of ham flavors increased. An essential part of the flavor and mouth-feel was the way the fat melted away, releasing flavors that told the story of the noble Iberico swine, of the Dehesa forest pasture, of the years of careful curing, and of the countryside of Spain itself.

The ‘matanza’, or sacrifice, has traditionally been a family affair. A pig would be slaughtered and the whole family would gather to preserve the meat for the rest of the year. Chorizo, salchichón and morcilla sausages would be made on the spot. Choice cuts would be set aside to be eaten fresh. And the fatty legs would be packed in sea salt and hung to dry in the cool winter air. This process still continues in some towns as it has for thousands of years. And over the last century, family factories have begun curing these hams in large quantities using the same methods. The hams are left to absorb the salt for a few weeks. Then they are hung in factories that still have open windows to allow the mountain air to circulate around the hams. Iberico hams cure for two to four years. Iberico hams usually about two years, Iberico Bellota hams for longer periods. This extraordinarily long curing process is possible because of the huge amount of fat on each ham and, in the case of the Bellota hams, the antioxidant quality of their diets. Over the curing period they lose nearly half their weight as the fat drips away. An incredible transformation occurs as the winter moves to spring and summer. The salted ham starts to sweat. Because of the salt, bacteria cannot take hold, but massive chemical changes occur. The meat becomes dryer, and cools off as the second winter commences. The special aspect of Iberico is that it can go through this cycle two or three times. The result is a build up of complex, volatile molecules in the ham that transform it from a piece of pork into an orchestra of flavors. With the Bellota hams, the most miraculous transformation is of the fats. Through this period of heating and cooling, salting and drying, the fats are broken down. Because of the antioxidants in the acorns and the unique curing process, the saturated fats are changed into healthy mono-unsaturated fats high in oleic acid. The only fat higher in oleic acid is olive oil. The succession of cultures that one-by-one set foot on the Iberian peninsula have each left a lasting mark on every facet of Spain’s culture: language, music, art, architecture and, of course, food. In fact, many people are surprised to learn just how much of a delicious melting pot Spain really is.

The basis of the history of Spanish food of course has to do with its geographical situation. First of all, the country is located on the Iberian peninsula and is therefore almost entirely surrounded by the waters. Naturally, due to this fortunate location, seafood forms one of the pillars of Spain’s gastronomy and categorizes the country as having a Mediterranean diet. The rest of Spain is a diverse terrain made up of mountain ranges, lush pastures, fertile farm grounds, extensive coastlines and more, which together provide quite the variety of fresh products. For example, Spain’s famous hams are cured high in the mountains, vineyards and olive groves sprawl across expanses of land, and fresh fruits and vegetables hail from throughout the country. 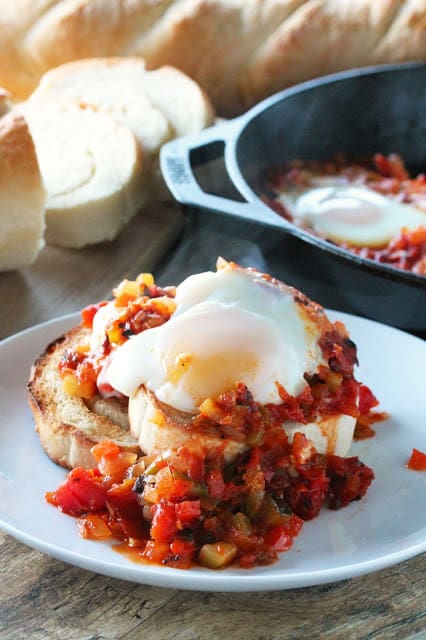 Pisto is a dish from Spain that is flavorful and full of vegetables, served over toasted bread and topped off with a fried egg. I would describe it as somewhere between French ratatouille and Middle Eastern Shakshuka, both of which are absolutely delicious. The vegetables in pisto are finely diced quite small and create an almost chunky sauce or stew. In this recipe I’ve kept it a one pot dish, cooking the eggs directly in the pisto. Serve this over some toasted french bread and you’ll be in heaven!

1. Heat olive oil in a large heavy oven-safe skillet over medium-high heat. Add in onion, zucchini, and bell peppers. Saute until vegetables are tender, about 5-7 minutes.

2. Add in garlic and paprika and saute one minute.

3. Pour in diced tomatoes and stir in salt. Bring to a simmer and reduce heat to medium-low. Simmer 15 minutes. Preheat oven to 375 degrees while you wait.

4. Create 6 little nests in the tomato mixture to hold the eggs. Crack eggs directly into the holes.

In a small saucepan over medium heat, combine water, sugar, salt, and butter. Bring to a boil and remove from heat. Immediately stir in flour and mix until it forms a ball.

For dipping sauce, melt the chocolate over a double boiler and add the cream.  Stir to combine.  For a thinner sauce, add more cream.

uice and oil in a blender or food processor until pureed. Transfer to a medium bowl, along with remaining ingredients. Season with salt and pepper to taste. Refrigerate until ready to serve. (Can be made several hours before serving.)

Cultures Throughout the History of Spanish Food

Endless cultures, as they passed through or settled in Spain, have influenced the history of Spanish food. The Phoenicians left their sauces, the Greeks introduced Spain to the wonders of olive oil, and Romans, Carthaginians, and Jews integrated elements of their own cooking into that of Spain. However it was the Moors who, during their centuries of reign, most impacted Spanish gastronomy. They introduced fruits and light seasonings into the Iberian diet, as well as combinations of fruits and nuts with meats and fish. Rice- a genuine staple of Spanish gastronomy- and therefore Spain’s vast array of rice dishes, come straight from the Moors, as does the use of saffron, cinnamon, and nutmeg. As you eat gazpacho on a hot summer day, thank this clearly gastronomically talented Moorish culture, as it too comes straight from them. Conclusion? Ironically enough, the foods we consider to be “typically Spanish” would either not exist or would be extremely different without the intervention of so many cultures into the history of Spanish food.

The Americas’ Impact on the History of Spanish Food

Along with its obvious historical impact, the discovery of the Americas with Christopher Columbus’ famous 1492 voyage resulted in the addition of more important elements to the history of Spanish food. As of 1520, foods from the new lands arrived in Spain and immediately began to integrate themselves into the Spanish diet. Amongst the many products that crossed the Atlantic and arrived on Spanish turf, tomatoes, vanilla, chocolate, various beans, and potatoes – which surprisingly arrived in Spain before arriving in Ireland- are all staples of today’s Spanish kitchen.

Centro Events, Cultural Events, Contact Us, About us, Cuisine,